In my previous blog on thermosiphons, I introduced a multipart blog on two-phase heat transport devices. With this blog, I would like to introduce you to heat pipes (sometimes written as “heatpipes”).

A heat pipe is a hermetically sealed pipe, typically lined with a porous sintered metal (wick), and containing a small mass of a working fluid. The pipe material and working fluid are chosen based on their compatibility (non-reactivity) and the expected operating range for the device. Copper/water and aluminum/ammonia are common pairings of materials and working fluids. 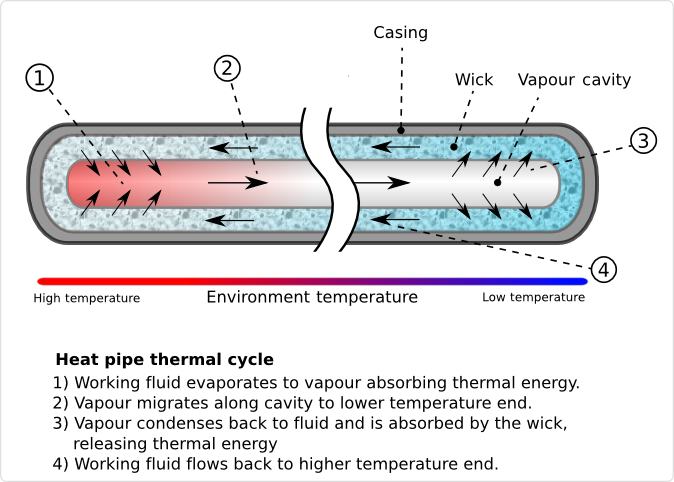 When heat is applied to the outside of one end of the pipe, heat travels through the wall into the wick where fluid in the wick is vaporized. Due to slight pressure differentials caused by the temperature gradient along the pipe, vapor flows to the cold end of the pipe where it condenses. The condensate then flows back to the warm end through the wick structure via capillary forces, where the cycle is repeated. There is often no designated evaporator or condenser: you can have multiple hot or cold spots along the length, and the heat pipe will automatically work to isothermalize them.

The heat pipe is considered one of the most efficient means to transport heat loads over long distances without the use of power or pumps.

Brief History of the Heat pipe

Heat pipes evolved from two-phase thermosiphons. In 1942, R. S. Gaugler patented the concept of adding a capillary structure inside a thermosiphon (patent 2350348) to assist the return of liquid from the condenser to the evaporator for a refrigeration unit. However, the concept was not developed beyond the patent level.

Gaugler's Concept of a Refrigeration Unit Using a Heat Pipe

Twenty years later, the nuclear physicist George. M. Grover developed the first working model of a heat pipe while researching how to use a nuclear reactor to generate electricity at the Los Alamos National Laboratory. He coined the term “heat pipe” in his 1966 patent for an “Evaporation-condensation Heat Transfer Device” (patent 3229759). His patent, although similar to Gaugler’s, provided a theoretical analysis of the heat pipe performance. For many years the terms thermosiphon and heat pipe were synonyms. Over time they became distinguished by the presence or the lack of a wick structure. Grover’s work was the launching point of a flurry of heat pipe development during the 1960’s.

With the addition of an internal wick, heat pipes could now work in a zero-g environment in addition to being able to pump the condensate (to some degree) uphill against gravity. Theodore Wyatt (U.S. Patent US3152774 A) proposed the use of heat pipes for space applications, specifically for the temperature control of solar arrays. For this system he proposed screen-lined flow channels integrated within the structure of each solar array, with all the arrays structures being interconnected by a central reservoir. Wyatt later introduced the concept of using a non-condensable gas to block the condenser, inventing an important tool: a variable conductance heat pipe (VCHP). By contrast, without a gas to “turn down” heat through-put, the previously described devices are considered to be constant conductance heat pipes (CCHPs).

Since the early 1960s, heat pipes have become commonly used in many industries for transporting heat over long distances and for isothermalizing. Their usage has expanded beyond nuclear and space applications to include applications such as electronics cooling, engine and oil cooling, solar thermal, waste heat recovery, and biomedical. Your laptop most likely has a heat pipe inside of it, as do some cell phones and perhaps even your car.

Today there are many types and configurations of heat pipes available. Here are a few of them with brief descriptions on how they work. Perhaps you will find one of these useful in your next design. 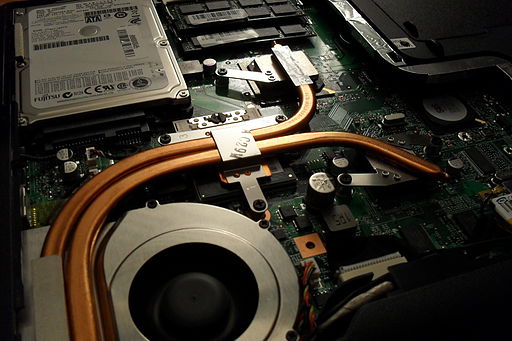 These devices are the traditional heat pipes: basically a pipe with some type of internal wicking system which can be based on sintered metal, screens, or axial grooves on the interior of the pipe wall. Plus, of course, a small amount of pure two-phase working fluid. The CCHP is a passive device and is capable of transferring heat with no means to control or throttle the power flowing through it. 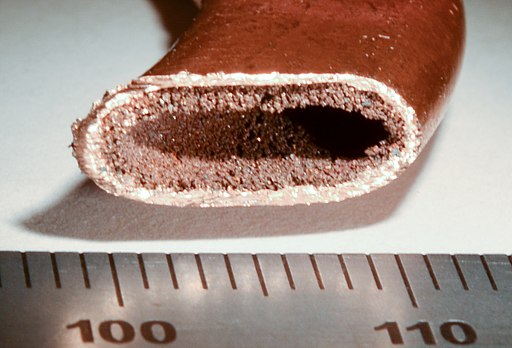 When working with a CCHPs there are a few key design limits you must consider:

The good news it the heat pipe manufacturer will consider these limits when designing a heat pipe for you.

The bad news is that their design will only be as good as the requirements you can provide. This means that the ability to model the heat pipe in the host system is critical. You need to bound all the possible operational and mission scenarios to which the pipe will potentially be exposed, assuring that you have adequate design margin.

VCHPs are similar in construction to CCHPs, however they generally use non-condensable gas to block a portion of the condenser in a controlled fashion. These pipes have a gas reservoir loaded with an inert gas. When the gas reservoir is heated, the gas expands into the condenser to reduce the condensing region, reducing the power through-put (often to keep the evaporator from getting too cold). VCHPs can be designed to have active or passive control of the reservoir temperature. They might have wicked or non-wicked reservoirs, depending on whether or not there is a concern for liquid getting trapped in the reservoir.

If you can find a copy, the Heat Pipe Design Handbook prepared for NASA by B&K Engineering is a great resource to understand more about CCHPs and VCHPs.  (Note that FCHP, or fixed conductance heat pipe, was often used interchangeably with CCHP in earlier years.)

VCHPs have similar design limits as do CCHPs: capillary limit, boiling limit, and so forth. In addition to the normal CCHP design considerations, the VCHP has the following considerations:

When it comes to modeling a VCHP, you can use bounding analyses for sizing purposes, but it is very important to run transient simulations: steady-state solutions are rarely sufficient. It is very common to have systems which will experience off-nominal conditions such as multiple gas fronts. Often these conditions are short-termed events, and the pipe will return to nominal operation after the excursion, but you need to make sure that your electronics, sensor, or payload can tolerate the excursion.

Although the VCHP described above may be the most common design, there are other types pipes with variable conductance available, here are a few of them.

This concept is similar to the VCHP but instead of blocking the condenser with gas, it is blocked with excess liquid. The reservoir is placed inside the evaporator end of the pipe where a bellows controls the expansion of the fluid.

This concept is a bit like a hybrid of the standard VCHP and the liquid trap pipe. It has a reservoir located at the end of the end of the condenser. Under normal operation the excess liquid accumulates in the reservoir and does not impact the pipe performance. If the profile reverses (condenser warmer than the evaporator) the excess fluid vaporizes and moves to the evaporator where it condenses, forming a liquid plug and stopping vapor flow to the evaporator. This concept has many design challenges with regards to minimizing the reservoir volume yet being able to block both the evaporator and adiabatic sections of the pipe.

In the mid 1980s, while working in the aerospace industry, I was tasked with integrating variable conductance heat pipes into a spacecraft for battery temperature control. At that time, there were no standard built-in methods for modeling heat pipes (Thermal Desktop and FloCAD did not exist, and the only tool available was text-based SINDA). The principles for modeling a VCHP were well understood by people in the heat pipe industry, but not by the average engineer. As we quickly learned, the process was very tedious and required the manual creation of the network, plus extensive custom “user logic” to balance the partial pressures in order to track the moving gas-front (the point in the condenser between blocked and unblocked condensation). In 2001, CRTech introduced the first built-in methods for system-level modeling of heat pipes. (If I were twenty years younger my life would have been so much easier!)

You may have heard that heat pipes are easy to model, “just use a highly conductive material, or a large conductor.” Or perhaps you may have been told you need to model the full thermohydraulics of the device, including phase change, fluid flow, and liquid positioning. Before you start modeling heat pipe, I recommend you first read this brief overview on How to Model a Heat Pipe.

FloCAD’s method for modeling heat pipes is a system-level simulation of the heat pipe based on methods used for over 30 years in the aerospace industry and have been proven to be very accurate (and here is that small print: when used properly). The tool can be used to model CCHPs with or without non-condensable gas (for degradation studies), as well as standard VCHPs. Other types of heat pipes can be modeled with Thermal Desktop but they may require a more customized implementation than the built-in method.

Don’t shy away from heat pipes because you are not sure how they work or how to model them. Today there is a plethora of material on the internet about how heat pipes work, which did not exist in the 1980s. And there are modern tools for verifying their suitability to your application, and for communicating your design requirements to your heat pipe vendor or designer.

And if you find you need extra capacity or extra flexibility (both in the mechanical sense and in the design sense), you might be ready for the next step past CCHPs and VCHPs: loop heat pipes (LHPs). They will be the subject of my next blog post.